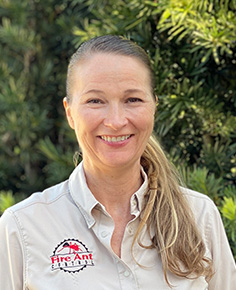 Lora was born and raised in San Diego, California. After graduating with a BA from Cal State San Marcos, Lora and Pete welcomed their first daughter. Soon after that, she and Pete relocated to Bokeelia, Florida where they welcomed their second daughter. Within months, Pete and Lora purchased property and began their first business together. When not nurturing palm trees and killing fire ants, Lora enjoys traveling and reading.

Growing up in southern California, Lora had no idea what fire ants were prior to relocating to Florida in 1999. The first home Pete and Lora lived in on Pine Island was located in the middle of a palm tree nursery that was treated professionally for fire ants. Lora’s first encounter with fire ants was when her daughter, 3 years old at the time, landed in a mound at the bottom of a slide at the local park. She screamed and stamped her feet trying to stop the stinging pain. After this, both Lora and her daughter have carefully avoided another encounter with fire ants.

Pete and Lora’s other child experienced an awful case of fire ant bites while at an event in Sarasota. She, and other kids, were all simultaneously attacked by fire ants. The kids suffered hundreds of stings as high on their bodies as their necks and had to slap and rub the fire ants that had crawled inside their uniforms. These situations are preventable and it is Lora’s mission to reach out to as many communities as possible to get rid of fire ants and stop attacks like these from happening.