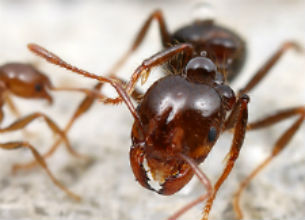 Residential homes and properties zoned for agricultural use have one thing in common… Fire Ants!

Since the introduction of this invasive species into the United States through Alabama in the 1930’s, they have been successful in taking over any plot of land where a queen decides to start and grow her colony.

They will attack any perceived threat to the colony by biting and stinging.

Often victims are unsuspecting of the mound below their feet and are not aware that they are threatening the colony until the signature sting is felt, usually on the feet, ankles and shins.

Signs of a fire ant infestation.

Not only do they cause harm to people, but pets can also be injured by this territorial ant.

If you suspect that you need Fire Ant Control in Sanibel, give a call at 239-312-8200 and we will happily provide a free estimate.