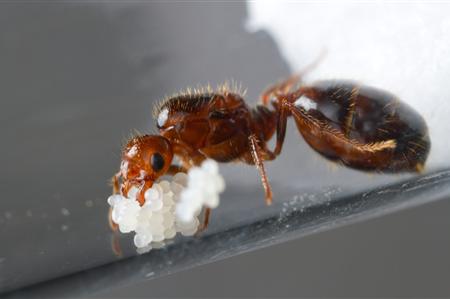 The history of fire ants in Florida is decades old.

Fire ants are not native to Florida or even the United States.

Two different types of fire ants were imported into Alabama in the early 1900’s. Since then, the red imported fire ant (native to Brazil) has spread rapidly through the southeastern US. There are no natural predators, competitors or parasites to act as fire ant killers to keep their population down.

Since their appearance in the US, fire ants have caused problems for native plants and species of all kinds including other beneficial ants. Our bait won’t hurt the “good” ants. Fire ants can cause extensive damage to crops, wildlife, farm animals, and even electrical wires and equipment. They have even been named on the “100 of the World’s Worst” by the Invasive Species Specialist Group.

Sometime in the early ‘70’s, colonies began to support multiple queens. A single queen can produce 200 eggs per day. 2-4 times per year, usually after it rains, winged ants will mate during flight. The fertilized queens fly in search of new land to colonize. All they need are unoccupied lands, warm temperatures, rain, and a food source.

Most of the south in the United States is already infested with fire ants and under quarantine. Despite attempts to stop the invasion of fire ants, they are spreading at a steady rate. Rules and regulations have been in place for decades, but fire ants can be accidentally transported via soil, sod, potted plants, electrical boxes, soil-moving equipment, etc. The spread of fire ants into cold, dry climates is unlikely but they can still be present for short periods of time.

Map of Infestation of Fire Ants

The estimated annual costs from attempts at population and damage control are close to $7 billion. This doesn’t include the cost of medical treatment for fire ant bites (stings). That amount is roughly $5 billion dollars annually.

Aside from monetary costs, fire ants harm our environment.

Fire ants bite and sting humans, pets and other animals causing discomfort, pain and even death. They compete for food with other insects, birds, quail and chickens. They feed on beneficial insects such as bees, butterfly caterpillars and attack baby birds, small mammals, and small reptiles.