Win the battle and the war against red imported fire ants in Lake Butler near Orlando, FL, with fire ant control and treatment that works! Fire Ant Control, LLC, provides the treatment required to minimize the potential of damage and injury. 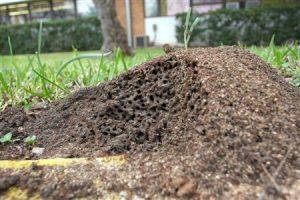 Red imported fire ants have a scientific name, Solenopsis invicta, but their nickname is highly descriptive. Fire ant bites and stings burn like fire, and any long term Southerner knows to avoid their attacks as much as possible.

Across the Southeast US, over 300 million acres of property are infested with red imported fire ants, and during a typical year, over 20 million people are injured by them.

The only truly effective mechanism for fire ant control is to call in the professionals. Fire Ant Control, LLC, provides quick and convenient service that works.

We operate out of Bokeelia, Florida, cooperating with sister companies throughout the southeastern United States to provide service to the entire quarantined area. Altogether, we’re able to treat up to 1,000 acres each day. The treatment measures that we use are available for all types of property and approved for applications around animals and people without a period of wait time before re-entry.

The Greater Orlando area is heavy with red imported fire ants, as is the rest of the South, due to the warm temperatures, regular precipitation, and great access to food and water sources. Fire ants reproduce quickly and grow their colonies easily in this area, so control mechanisms need to be in place, the best of which comes from the team here at Fire Ant Control, LLC.

Primarily, you know fire ant control should be on your to-do list as a property owner if you live in this area, but if you need hard physical evidence, here’s a primer.

Above ground, the only visible evidence of a fire ant colony will be fire ant mounds. These mounds, if left to expand, will stand a bit above ground, with a diameter of about a foot, and consist of loose soil. You’ll often find them against vertical structures like poles and sidewalks, especially after rains.

In the unfortunate instance that you don’t visually identify the mounds, you might come across one and regret it fairly quickly. You’ll know that you’ve been attacked by fire ants because of the burning pain and the unique blister that the attack leaves behind.

Proven fire ant control measures that we provide target the queen’s ability to reproduce. We apply an appealing food-like granular bait in a strategic fashion for the worker ants to take to the queen for her sustenance. Instead, it makes her infertile and seals the demise of the entire colony as the living ants die.

This process may not be immediate, but it is highly effective, providing an 85% reduction in the fire ant population by the end of a single red imported fire ant life cycle.

Fire ants live mobile lives, producing winged males and females to fly, mate, and establish new colonies. After mating, the male will die, and the female will become the queen of her own colony, shedding her wings, dropping to the ground, and finding the ideal location for her kingdom. Because of this mobility factor, fire ant treatment must be repeated every four months.

Fire ant control and treatment in the Lake Butler area of Orlando, FL, is as easy as a booking with Fire Ant Control, LLC. Call (239) 312-8200 or follow this link to schedule your service.