No property in Sydney, FL, is immune from an infestation of the invasive fire ant population. Still, Fire Ant Control, LLC, provides control and treatment measures that effectively manage the population. 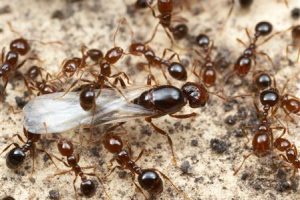 Red imported fire ants are a major concern for homeowners, property management, farm and ranch owners, and governmental agencies. The costs incurred due to damaged equipment, time lost, and animal and personal injury are significantly disruptive to the Florida economy and ecosystem.

Red imported fire ants are an invasive species. They originally came from South America and entered the US through the Port of Mobile nearly a century ago. Since the 1930s, when this invasion occurred, the species has spread throughout the southern portion of the country, with a particular concentration in the South East.

Fire Ant Control, LLC, along with our sister companies, serves the whole quarantined area, up to 1,000 acres each day.

When balanced against these losses and the risk of damaging personal injury, you’ll discover that treatment from Fire Ant Control, LLC, is cost-effective and appropriate for managing the fire ant populations on residential, commercial, agricultural, and all other types of properties.

Common concerns for homeowners include injuries to pets, residents, and guests; damage to the home’s foundation, electric wiring, HVAC system; and destruction of expensive landscaping installations.

Fire Ant Control, LLC, provides the area with management services that limit the potential for fire ants up to 99% for four months at a time. Schedule your service for an effortless treatment for your property.

The granular bait that we use resembles food to the fire ants. They carry it down into the colony for the queen to eat, and when she does, she becomes sterile. With the queen unable to lay new eggs, the population is substantially reduced within one life cycle. This solution isn’t immediate, but it is more effective than other treatments targeting surface ants. The Fire Ant Control, LLC, method works for four months at a time, after which you will need to reschedule service.

The method we use targeting the population is the only effective way to manage the population. Other options only kill surface ants, and the user can be injured because of the aggressive nature of their attacks. Their ability to survive flooding, cold, and heat extremes makes fire ant populations difficult to manage.

Because fire ants move to reproduce, escape flooding, and find food and water, the treatment must be reapplied three times per year to address any incoming populations.

Arrange to protect your property in Sydney, FL, with fire ant control and treatment measures. Fire Ant Control, LLC, provides effortless and cost-effective service with one simple call to (239) 312-8200.