Fire ant management, as difficult as you might imagine it to be, isn’t impossible. Fire Ant Control, LLC, provides treatment that is safe and effective for the animals and people in your Temple Terrace, FL, property. 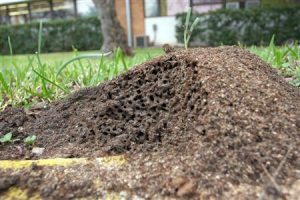 The fire ant populations in Florida are unavoidable and often uncontrolled, and the pain of fire ant attacks shouldn’t be underestimated. The aggressiveness and collective nature of their attacks mean that you’ll usually experience multiple bites at a time. The best response to bites is to provide first aid by washing or applying rubbing alcohol, but in the case of an anaphylactic reaction, pursue medical attention ASAP.

The best solution is to give Fire Ant Control, LLC a call so that the bites don’t happen in the first place.

Handling fire ants with DIY solutions is often a no-win prospect. Poison from big-box retailers has minimal effect on the overall population because it targets the surface fire ants within the mound rather than the majority of the population in the underground colony. You may think you’ve had success only to find that the ants will simply transfer their mound to a new location a few feet over from the one you just treated.

Our control methods rely on a granular bait that inhibits the growth of the ants. When spread, this fire ant bait appears to be food, and the worker ants ingest it and carry it into the colony. The queen then gets a taste and becomes sterile. Without new eggs being laid, the population gradually dies out as the lives of the living fire ants end.

Our treatment measures work for half a year at a time, keeping populations that are biannually treated up to 95% free of fire ant activity.

Imported red fire ants move, and the baits we apply are consumed and washed away. By scheduling a service every four months, you’ll maintain consistent control without giving the ants an opportunity to move back in.

Why Worry about Fire Ants?

The Imported Red Fire Ant is from South America originally, slowly moving northward into the Southern states. As an invasive species, fire ants win out against their competition, so the population will often grow unchecked without effective intervention.

These fire ants will invade practically any location. Your yard, driveway, and planting beds will be vulnerable to fire ants, but you could also see damage to young trees, your HVAC system, the foundation of your home, and even the food in your pantry!

The effortless nature of effective fire ant control is yet another reason to schedule service from us every four months. Our methods don’t require an interval of time before re-entry. You won’t have to lift a finger as we disperse our product in a targeted and effective manner.

Fire ants are an expected part of living in this area. Dealing with them can be difficult or easy, depending on the approach. For effective, simple, and affordable fire ant control & treatment in Temple Terrace, FL, count on Fire Ant Control, LLC. With one call to (239) 312-8200, you’ll have the solution on the way.