Fire ants are something that no one wants to deal with but are an unfortunate part of living in the south. Did you know there are over 280 species of fire ants? Crazy, right? Half of the battle of getting rid of them is knowing what kind you are dealing with. With that being said, which species of fire ants are found in Florida? 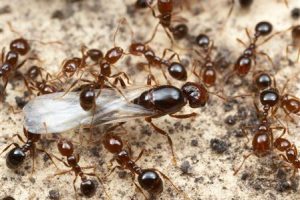 The short answer is that there are two main species.  These are the Red Imported Fire Ant, otherwise known as Solenopsis Invicta, and Solenopisis Geminata, the tropical fire ant, which are much less common. While both are invasive and not good to have around, the Red Imported Fire Ant is the worse of the two and the one you really need to watch for.

Solenopsis Invicta is the species most commonly found in Florida – the one you don’t want to find crawling up your ankle. This ant is considered a major pest in most parts of the South. So ,what makes these ants so bad?

Let’s talk about their ability to form a chain and float on water. That is not normal ant behavior, which makes the RIFA so much more dangerous than any other. If their mound floods and they cannot stay there, they can survive by floating, but they are also a lot more dangerous in that scenario. They no longer have a mound to run to, so they will sting faster and with more fury.

Where Do They Live?

If you are worried about what type of species of fire ants are found in Florida, you need to know where you can find them and what their homes look like. Traditionally, fire ants prefer high soil or grass, and they like to live in a large mound. Other appealing habitats are near old rotting wooden logs or close to buildings. For Floridian homeowners, it is important to know they also like to take up residency near HVAC units and electrical boxes.

Since they don’t make the best neighbors, if you suspect you have a nest of fire ants living on your property, calling a pest control specialist that specializes in fire ants is something you should do immediately.

Headquartered in Bokeelia, Florida, Fire Ant Control, LLC serves the entire imported fire ant quarantine area of the southeastern U.S. Our potent, food-like granular bait contains an insect growth regulator that sterilizes the queen and is approved for use around people, pets, livestock, and on pastures, hay fields and farmland.

Worker ants eat the bait and carry it down into the colony, causing the fire ants to die naturally.  Once the queen is sterilized, the entire colony will disappear, and no new ants will be born. Within weeks, your property will be 85-95% free of fire ants.

What species of fire ants are found in Florida? The most troublesome is Solenopsis Invicta. If they’ve made themselves at home on your property, getting them taken care of is imperative for stopping their spread.  Fire Ant Control, LLC offers the best fire ant treatment around! Give us a call at (239) 312-8200 for a free estimate.